The tone of Bremer's tenure was set with his first major act on the job: he fired 500,000 state workers, most of them soldiers, but also doctors, nurses, teachers, publishers, and printers. Next, he flung open the country's borders to absolutely unrestricted imports: no tariffs, no duties, no inspections, no taxes. Iraq, Bremer declared two weeks after he arrived, was “open for business.”

One month later, Bremer unveiled the centerpiece of his reforms. Before the invasion, Iraq's non-oil-related economy had been dominated by 200 state-owned companies, which produced everything from cement to paper to washing machines. In June, Bremer flew to an economic summit in Jordan and announced that these firms would be privatized immediately. “Getting inefficient state enterprises into private hands,” he said, “is essential for Iraq's economic recovery.” It would be the largest state liquidation sale since the collapse of the Soviet Union.

But Bremer's economic engineering had only just begun. In September, to entice foreign investors to come to Iraq, he enacted a radical set of laws unprecedented in their generosity to multinational corporations. There was Order 37, which lowered Iraq's corporate tax rate from roughly 40 percent to a flat 15 percent. There was Order 39, which allowed foreign companies to own 100 percent of Iraqi assets outside of the natural-resource sector. Even better, investors could take 100 percent of the profits they made in Iraq out of the country; they would not be required to reinvest and they would not be taxed. Under Order 39, they could sign leases and contracts that would last for forty years. Order 40 welcomed foreign banks to Iraq under the same favorable terms. All that remained of Saddam Hussein's economic policies was a law restricting trade unions and collective bargaining.

If these policies sound familiar, it's because they are the same ones multinationals around the world lobby for from national governments and in international trade agreements. But while these reforms are only ever enacted in part, or in fits and starts, Bremer delivered them all, all at once. Overnight, Iraq went from being the most isolated country in the world to being, on paper, its widest-open market.-- Naomi Klein, Baghdad Year Zero 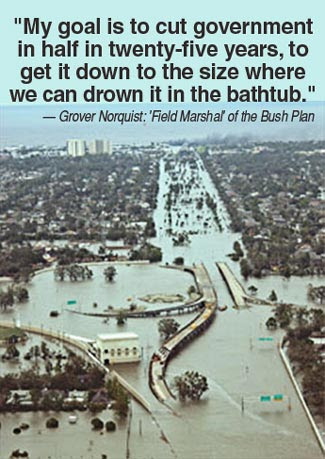 The wave of foreclosures that has rippled across the U.S. has already battered some of our largest financial institutions, created ghost towns of once vibrant neighborhoods -- and it's not over yet. -- From a report compiled for U.S. Mayors Conference, November, 2007.